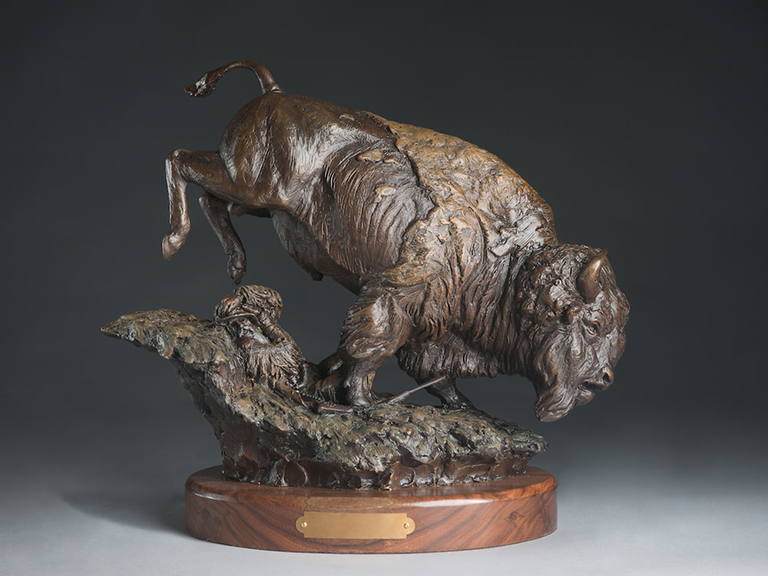 I grew up in Southern California in the foothills outside of Riverside. As a child, I developed a love of the outdoors. My grandfather was an accomplished landscape and wildlife oil painter from Utah, so it seemed only natural for me to follow in his footsteps and eventually moved to Utah myself. My grandfather tutored me as I began drawing outdoor subject matter and Native American portraits. This tutoring continued until he was physically unable, due to the effects of Parkinson’s disease. After four years of high school art instruction, I received further art training from a professional artist. She, as well as my high school art teacher, encouraged me to make art my career.

At 18 years of age, I produced my first limited edition lithograph and began marketing myself and my art work. With a desire to share my good fortune, I earned enough money to move to Puerto Rico and do service work for two years. Upon returning home, I immediately began doing commercial sculpture and commissioned painting. It was not long after returning home that I also found the woman I wanted to marry, Aimee Bolyard. Less than two years after our wedding, we had our first child; it was at this time that I became serious about finding a way to make a career out of my artistic abilities in order to be able to support my young family. I began receiving further training from prominent and successful artists when, at the age of 24, I acquired a job as a metal chaser and point up artist at a fine art bronze foundry outside of Salt Lake City. Soon, feeling confident in my abilities as a sculptor, I began a new portfolio of all bronze work and within a short time I was receiving honors at local shows and art events. I have since continued on to sculpt for a memorial company that creates bronze sculpture to memorialize a person’s life through sculpture and I continue creating pieces to enhance my portfolio and enrich the lives of my customers.

My first commissioned bronze came with being chosen to recreate the trophy used to honor recipients of the C.A.M.I.E. (Character And Morality In Entertainment) Movie Award. Some examples of C.A.M.I.E. recipients include: the producers of the television series “Seventh Heaven,” Disney Productions, actress Ann Hathaway, and the producers of the movie Radio. My most recent private commission was a four and a half foot grizzly bear, The Ambassador. This piece was inspired by the movie bear “Bart the Bear”. I have also created an eleven foot sculpture of two eagles soaring around one another entitled “Freedom to Soar”, for the city of Irving, TX.

I would describe my bronze sculptures as realism that weaves both loose and tight textures together. This weaving allows the eye to easily travel through the various forms and features of a piece without distraction.
My most common subject matter is North American wildlife and Old West themes. As a child, I dreamt about what it might have been like to have lived during the time when Mother Nature governed this part of the world and when those who inhabited it were her respectful subjects. A community did not just include man, but also the wildlife surrounding it. A person’s greatness was determined by their bravery, honorable actions, and by how well they provided for their loved ones, not by the size of their pocket books or by what they could do to shock the media.

I enjoy sculpting things that cleanse the soul. The animals that I sculpt represent character traits that I admire. Even though I receive many requests that involve one of my favorite subjects, eagles, I also enjoy depicting mammals. As of late, my focus has been in favor of figurative subject matter with the recent acquisition of some commissioned pieces.

Many of my pieces represent a certain dignity. In the case of “Quiet Victories,” which depicts the solemn yet proud face of a mature Jicarilla Apache woman, I hope viewers will contemplate the reason for such a noble expression. Other pieces represent a reserved strength and power such as in the case of my piece “Undisputed.” This sculpture depicts a fully grown, greatly muscled grizzly bear just simply walking. He has nothing to fear and nothing to dictate his course in life. One could assume that due to his awesome power and capacity there are few things that threaten him. My eagles represent the ability to rise above the trials of life. These eagles can get high enough to get a clearer view on their world and how they might make the best out of tough situations.

Each of my sculptures has meaning to me. They are a symbol of what I admire. They are feelings or memories of my childhood. They are a reflection of what I love now. I try to minimize the amount of tooling I use to create a piece because I want my fingerprints to be left on the outside surfaces. I want others to know that this work came from an actual person who cared enough about the subject matter that he could turn it into something tangible so as to allow someone else to enjoy its significance.

Finally, my work is also a reflection of gratitude for the Great Creator of all things, who did not just provide for us the basic needs of survival, but gave us marvelously beautiful things to see, feel, touch, taste, and smell. Beyond just keeping us alive, these sensory experiences allow our souls to be filled. His creations are so magnificent that they permeate down into my soul. In short, when I sculpt, often the deeper meaning that governs me is, “I think this creation is so wonderful that I would like to internalize it and then show others how it makes me feel.” Sculpting is a way that I can say thank you for all I am fortunate enough to experience in my life.

I have been sculpting in bronze since 1999. I have shown my work in Sculptural Pursuit Magazine; El Paseo Gallery in Park City, Utah; The Utah Artists Hand Gallery in Salt Lake City, Utah; and Soda Creek Gallery in Sisters, Oregon. I currently display my work through Mountain Trails Gallery in Park City; my works have been featured in Southwest Art Magazine; Wildlife Art Magazine; The Loveland Sculpture Invitational in Loveland, CO; and various other art events and shows across the United States. In the July/August 2006 issue Wildlife Art Magazine I was featured in an article as an “up and coming artist”.
Notable commissions include City of Irving Texas; Bass Pro Shops, Missouri; Joe Gibbs Racing, North Carolina; Eldora Speedway, Ohio; Bentonville City Fire Department, Arkansas; Kenneth and Joanne Clinger, Utah; and C.A.M.I.E. awards, Utah.