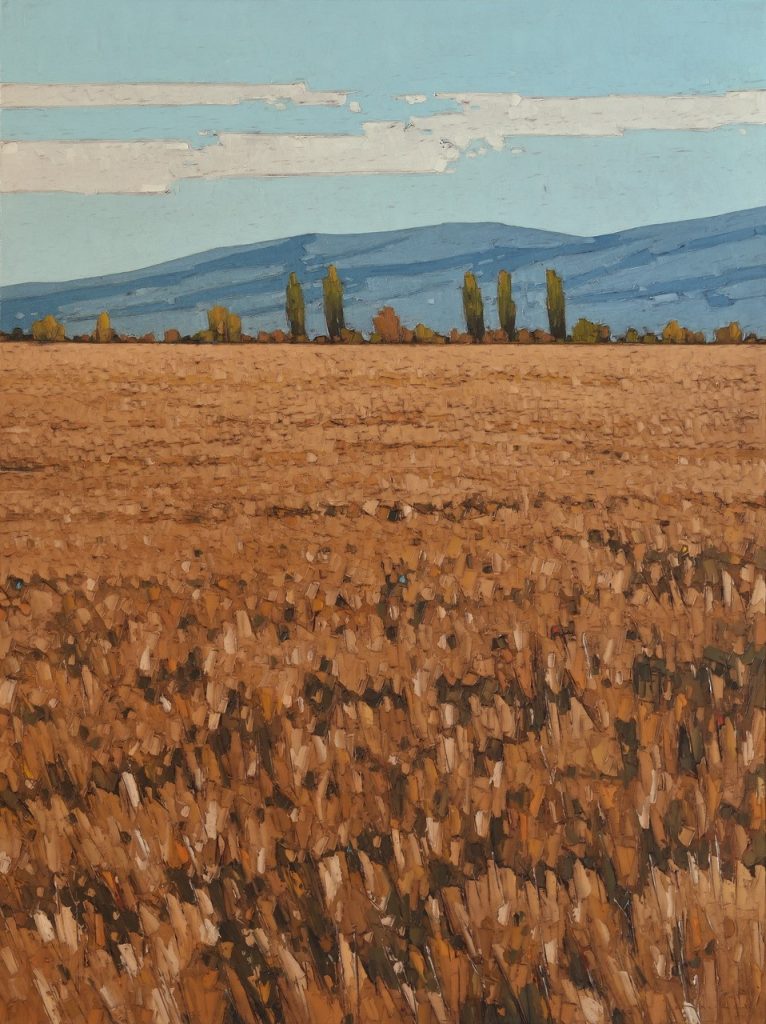 “Art has always dominated the direction of my life.  I remember when I was very young, I would go to my grandmother’s and paint little watercolors with her as she painted.  Even then, I remember learning the importance of seeing. This has just continued through my life and has helped me learn and grow. It has filtered the way that I view my surroundings.  I no longer ignore the beauty of the landscape; It isn’t just dirt and trees and sky, but a compound of colors and values and shapes.”

Jeff graduated from the University of Utah in 2004 with a Degree in Painting and Drawing and has been able to pursue this career full time.  Since graduation, Pugh has gained a collector base and gallery representation in the American West.  He has been able to take advantage of opportunities to study with John Erickson and Gary E. Smith, both of which have helped diversify and enrich his work.

“I love the idea of ‘filters and abstractions’.  It has been the catalyst for my work from the start. A filter is any sort of separation from the source of the painting.  That could be from painting en plein air (which would be one degree of separation) to photographing a site, manipulating it on the computer and printing it off on a napkin (at least three degrees of separation).  Depending on how far removed you are from the source material will definitely influence how abstracted the work will become.  We all have our own techniques and approaches that will abstract the final piece and we could abstract without the aid of filters, but having this understanding enhances the process.”

“My work continues to evolve,” notes Pugh.  It has to if I want to be an artist of any caliber.  It has gone from a realistic representation to an abstraction of the inherent designs found in nature.  I have found that by carefully choosing the filters I use, I am able to enhance those designs and push those abstractions even further.”

Jeff currently lives in Millcreek, Utah with his wife Julia and two children Remlee and Benton.

The Following is From Western Art Collector, February 2012:

“I love what nature offers, but at the same time I want to push it,” says Pugh.

“When I originally started painting some of these cows I did them realistically, and then they evolved into geometric shapes. There’s lots of grouping of cows where you can’t tell where one ends or one begins. The only indication is the white head or red tags,” explains Pugh, who is known as the “cow man” because bovine frequent his canvases. “I’ve had a love hate relationship with them. I don’t know if this is my revenge on them or not.”

Pugh credits Smith and John Erickson, a fine expressionist figure painter and art professor at 74 the University of Utah, for helping to diversify and enrich his work. “The two opposites have become a hybrid of what I do:’ says Pugh. Smith encouraged Pugh to try the palette knife, and over the years his knife work has become more sophisticated. He has also noticed a gradual evolution into ratio, preferring a 1-2 ratio. “Those become strong, fun horizontal pieces for me,” says Pugh.

His cows with their long flat backs geometrically mimic the design of the barn, while the pixilation in the mountain echoes down into the foreground.

Overall, notes Pugh, “There’s lots of repetition in design between the cows and the barns and the trees and the cows.” Within this grouping collectors will notice a lot more color, albeit subtle. “It’s hard to evolve from a tonalist to a colorist, but there are more hints of red or blue,” says Pugh. “There’s growth within the color theory of painting.”

As a landscape painter, Pugh has depicted everything from red rocks to desolate farmland. He gathers reference material during road trips and by taking the long route when delivering paintings to out-of-state galleries and clients. “One of the nicest compliments is when someone says ‘I know where that tree is’,” adds Pugh.