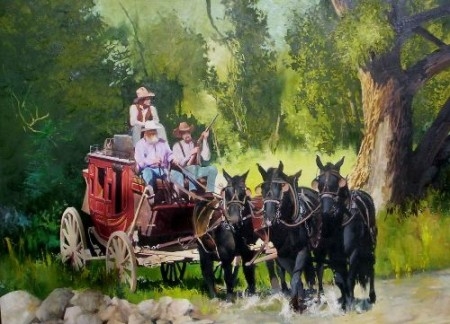 Oleg Stavrowsky was born and raised in Harlem, New York, in 1927 to Russian parents.

During The Second World War, Oleg was drafted into the United States Army, served in Europe and was honorably discharged as a staff sergeant in 1949. After his return to the United States he met and married his wife Carol. Together they have raised eight children.

When Stavrowsky was about thirty, he decided he liked graphics. He got a good job as a technical illustrator working for McDonnell-Douglas Aircraft.

“One day back in about 1969, I was in Oklahoma City, and decided to see what was happening at the Cowboy Hall of Fame, I liked what I saw and made up my mind that I’d like to give painting a try.” Oleg has been painting ever since.

Stavrowsky, now in his 80s, is one of the West’s most sought after artists. “I want to do great imagery,” he says. “A good painting never leaves you alone. You return to it because it keeps beckoning to you to tell you all about itself. It doesn’t blend into the wallpaper and you don’t have to talk about it. Artists who do that are telling you more about themselves than the painting.”

Stavrowsky is a poignant visual storyteller of the American West. He does not often divulge the elements that inspire his pictures, stirring the imagination of the viewer. Neither is he an apologist about the inequities or exploitation that shaped our nation. “To me it’s simply fascinating history, uniquely ours,” he offers.

Oleg’s subjects are rendered in a loose, expressive fashion, the paint often executed in a thick impasto with a brush or palette knife. Oleg combines his western subject matter with a truly unique perspective and striking composition.

Oleg jokes: “very few people know me personally and I have heard that I don’t really exist, that I am black (because I was born in Harlem), that I am from the ‘old country,’ (because of my name), and that I don’t speak English.” Of course, none of this is true.

One big factor in my life is jazz. When I paint, I am listening to music. Sixty-four bars of good saxophone is like four square inches of good brush licks on a canvas. Western painting is my life, my income, my joy, my everything.”